Logs and pcaps are attached. There were 2 instances of rollbacks observed. Please use these timestamps for analysis

I have the packet capture files too and can attach them if necessary.

I think the case where the bucket got flushed and Indexer had to rollback to zero is completely fine.

The is when the bucket flush starts:

This is when it finishes:

Flushs empties the bucket by deleting the vbucket which results in the creation of a new vbuuid. It's not surprising that Indexing rolls back to zero a few seconds after the bucket flush finishes:

The second case at 5:06 is more interesting as it is the result of a failover induced by an OOM kill.

CPU is high on all 3 of the memcached nodes for the last 10 minutes before the failover – however it doesn't seem to be that high prior to that. 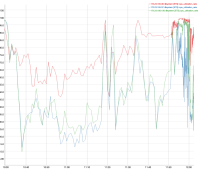 That said, I see quite a lot of slow scheduling for the DCP connection notifier task on the non-IO thread workers during this time.

Some of these waits are pretty lengthy. Dave - is this evidence for KV being slow to get mutations to indexing? Is there a reason for the slowness?

Dave - is this evidence for KV being slow to get mutations to indexing? Is there a reason for the slowness?

Looking at mortimer we for the flush around 03:26, we see the test8 has a bucket flush at [1], followed by the bucket being repopulated with data. Nodes 106.37 and 106.156 hit the high watermark and successfully free memory, dropping back to low watermark and continue to oscillate as more data is added, but node 105.36 exceeds the high_watermark and never comes back down below the high watermark: 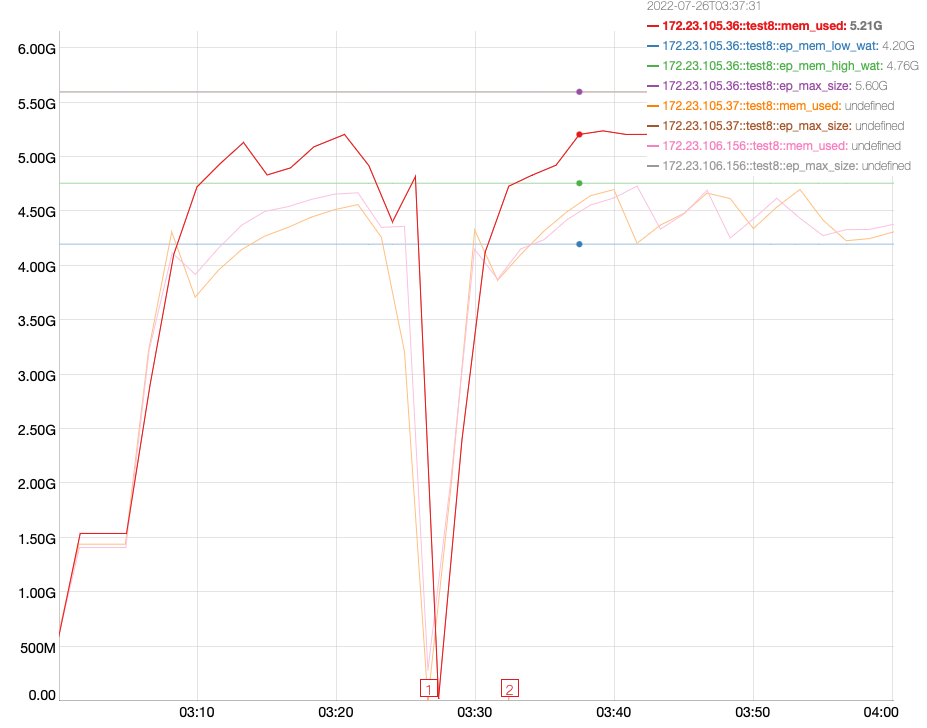 Looking at a breakdown of memory, we see large amounts in CheckpointManager, but not in the disk queue - i.e. the bulk of the memory is outstanding items for DCP stream(s): 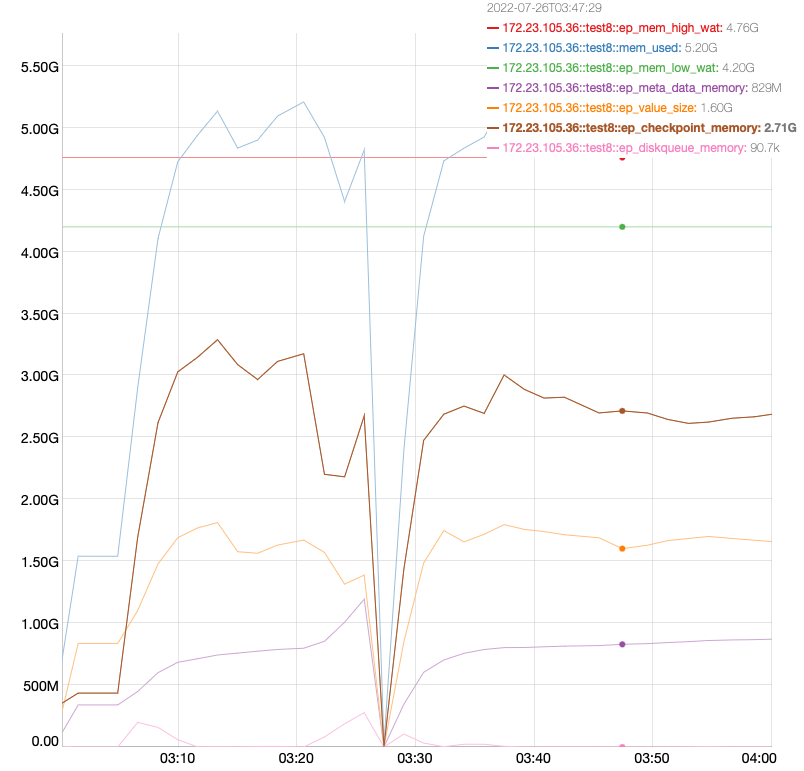 Looking at item counts, we see both replication and GSI have large number of items remaining: 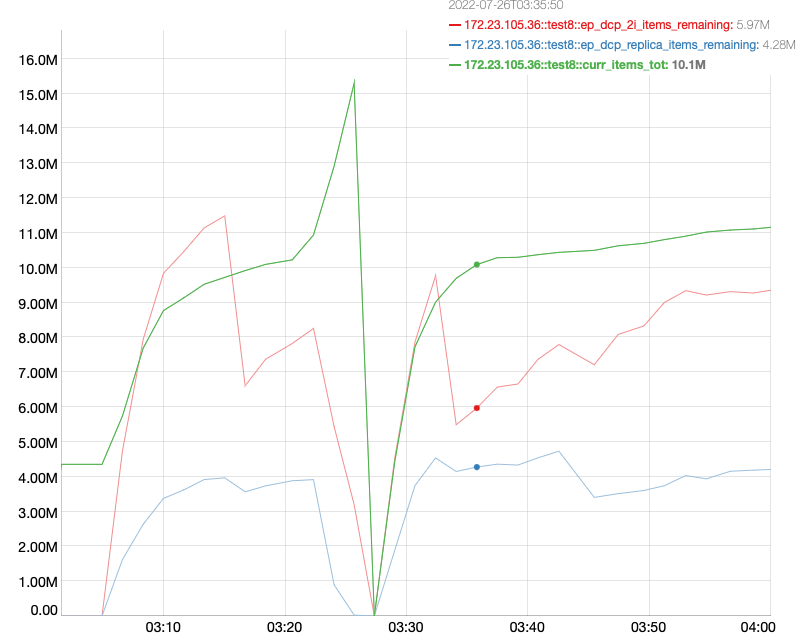 Essentially the workload is generating more mutations than KV-Engine can transmit via DCP to replicas and indexing nodes; hence a backlog is formed which consumes most of the bucket memory. To attempt to alleviate that KV will switch from in-memory to disk backfill - which will result in larger snapshots being sent:

Note that we have improved this behaviour in later versions - most notably in 7.1 by limiting the amount of memory which can be used by CheckpontManager (for holding outstanding DCP & disk mutations) - that wouldn't avoid the switch to backfilling, but would keep more memory free in the bucket for normal operations, andr apply backpressure to the client sooner telling them we are temporarily out of memory.

The later OOM-kill around 05:02 is essentially the same - there rate of ingress mutations is greater than the environment can egress to replication and indexer, resulting in large disk backfill snapshots being sent to indexing.

Note this setup only has:

Essentially the system is not well-sized for the workload being run on it, and things are running slow / queues are backing up etc.

Varun Velamuri Pavan PB Since, this is marked for 7.1.2, can you pls also update the due date on this? Thanks!

I don't think there is anything wrong with indexer in this case. Removing the fix version as 7.1.2 for now.

Varun Velamuri added a comment - 01/Aug/22 3:54 AM I don't think there is anything wrong with indexer in this case. Removing the fix version as 7.1.2 for now.

Varun Velamuri added a comment - 22/Nov/22 12:34 PM Pavan PB - Resolving this as not-a-bug as it turned out to be sizing issue (See the comment from Dave Rigby above)